Nigerian entertainer who made the headline during the EndSars protest, Obianuju Catherine Udeh popularly known as DJ Switch, has openly refuted claims that she got asylum to Canada.

Switch was on the trend for some time after she live streamed the shooting that occurred at the Lekki Toll Gate via an Instalive video on October 20, 2020.

Shortly after the incident at the tollgate, rumour went rounds that she left Nigeria to seek asylum in Canada.

At that time, Peter Okoye’s personal assistant, Charles Abi also confirmed that DJ Switch fled the country and that she is safe there.

In a new twist, Switch took to her Instastories to debunk those claims of her being granted asylum in Canada.

She explained that she never got into CanadaShe further revealed that she has been cooked up in a house for some months.

She wrote: “To the people who know me so well, I don’t really share, except my craft, art and comments on social issues that affect us all.

But let me say this… news outlets and bloggers, I know traffic is the game but when you don’t really investigate properly and run with things that you don’t know for sure or have verified, you sincerely hurt and in some cases cause serious complications for people in “REAL LIFE”.

I’ve been cooked up in a house for monthsI never got asylum to Canada, I did not step foot into CanadaI didn’t even speak to anyone who claimed they spoke to me on the issue.”

Anyways, I will leave it there.

By the way, it is now that I am traveling…And it is not to Canada! 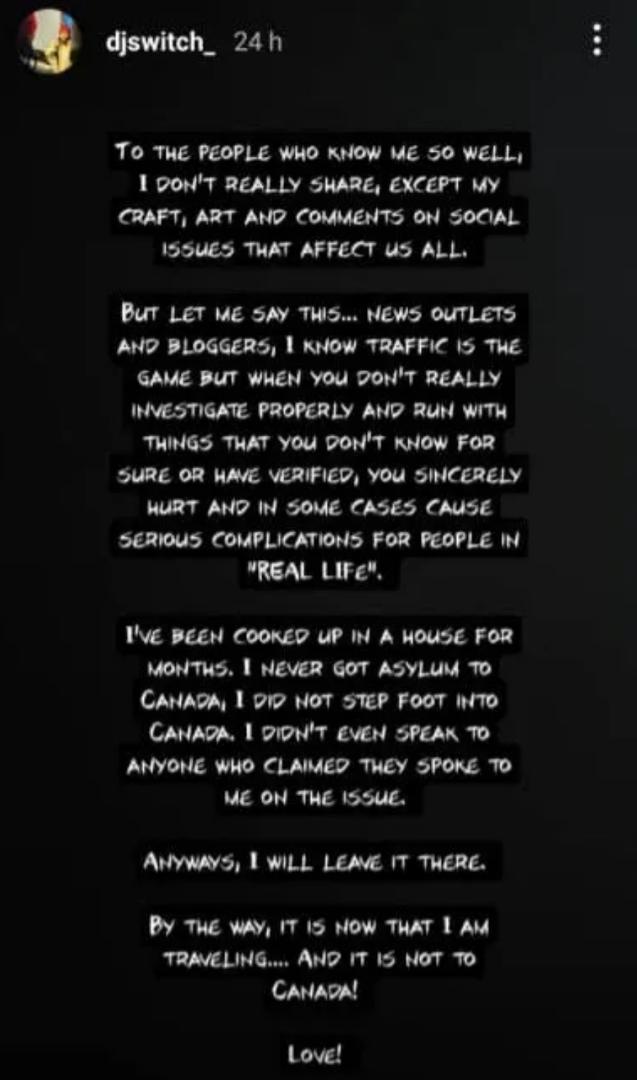