Simi Gives Reason For Always Up For Women 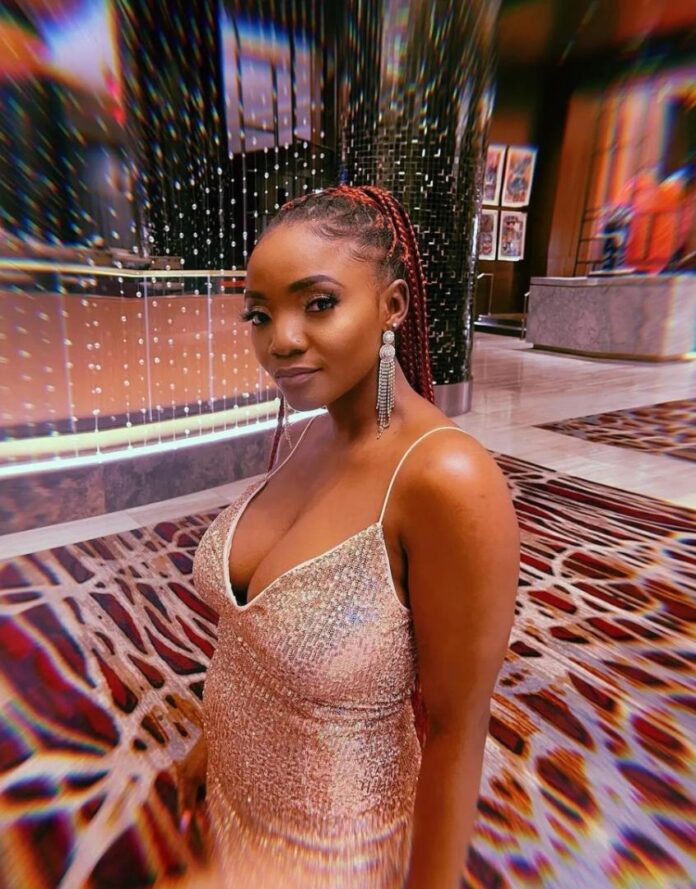 Popular Nigerian Singer, Simi has given reasons why she recently chose to start using her platform and voice to speak up for women.

Her stance came in after she was dragged the opposite gender who accused her of always involving men in her posts when motivating women.

This happened after the mother of one took to her Instastories to get reasons why women are described as cocky when they praise themselves, but a man is called “Chairman” or “boss” when he hypes himself.

The man attacked her after she made the post but Simi fired back at him.

See their chat below,

In another post, the sensational singer further gave reasons for always speaking up for women, despite receiving several backlash from netizens.

She said she will continue to speak up for women’s right because most women are oppressed men.

She added that any man who feels intimidated her post is guilty of oppressing women and should check himself.

In a lengthy post she shared on her Instastories, she wrote:

“Why are you always talking women this women that, Simi’s own is too much”Let me give you perspective.When we complain about Nigeria and the government tells us to shut up, we don’t shut upWe can’t afford toBecause the people are still oppressedIt doesnt mean all Nigerians are suffering, but majority areIt’s the same for women we continue to speak because majority of women are still oppressed.

Some women have it pretty goodI know I have it much better than most womenBUT IM THE MINORITY! And even at that I know men with the same skill set as me and other women have it betterIt’s not fight it’s just true.

When Nigerians are complaining, and using developed countries as example we don’t expect Canadians to come and say ‘why are Nigerians always complaining their own is too much’

Why are you so annoyed? If you are a man and don’t do these things then I’m not talking to you! Why are you angry?

Treat women better doesn’t mean treat men worse’.Because the women in your compound or your sisters are better off doesn’t mean everyone is.

The fact that you got food on your table doesn’t mean everyone is eating ffs.Speaking for women is not automatically attacking menIf you feel attacked it’s because you are guiltyit’s not rocket science.

I don’t want men to have less respect or valueI WANT WOMEN TO HAVE MORE! 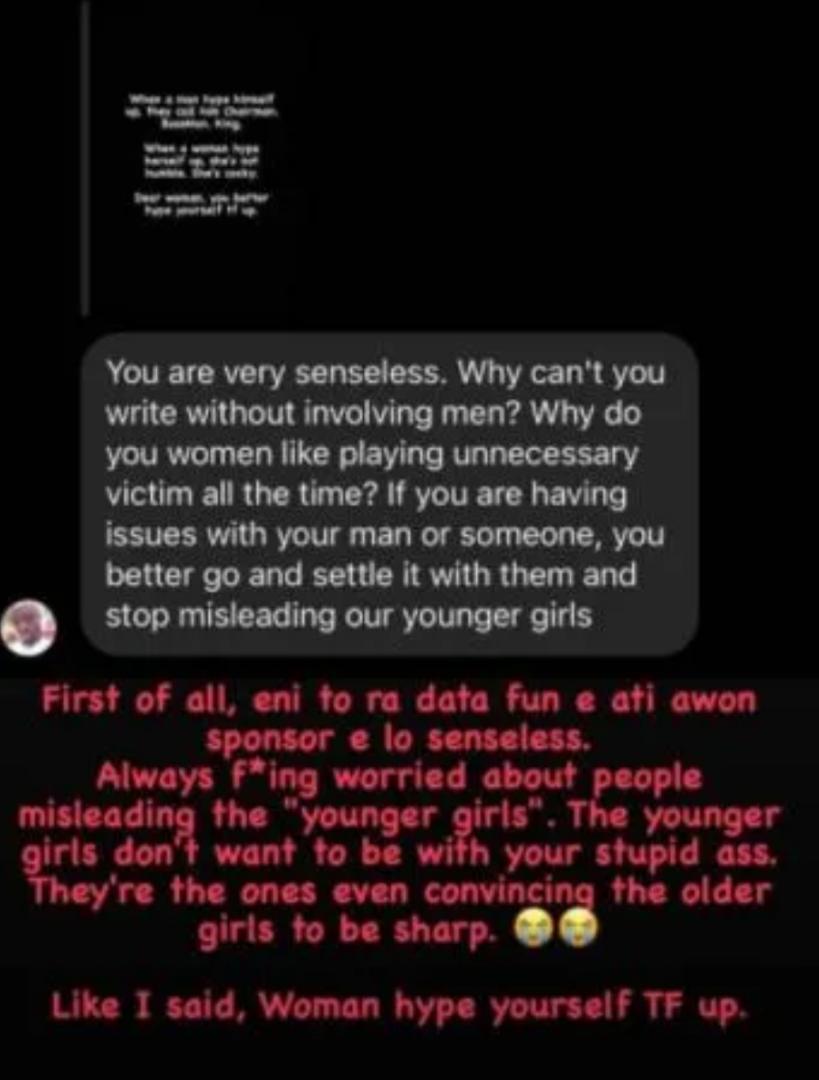 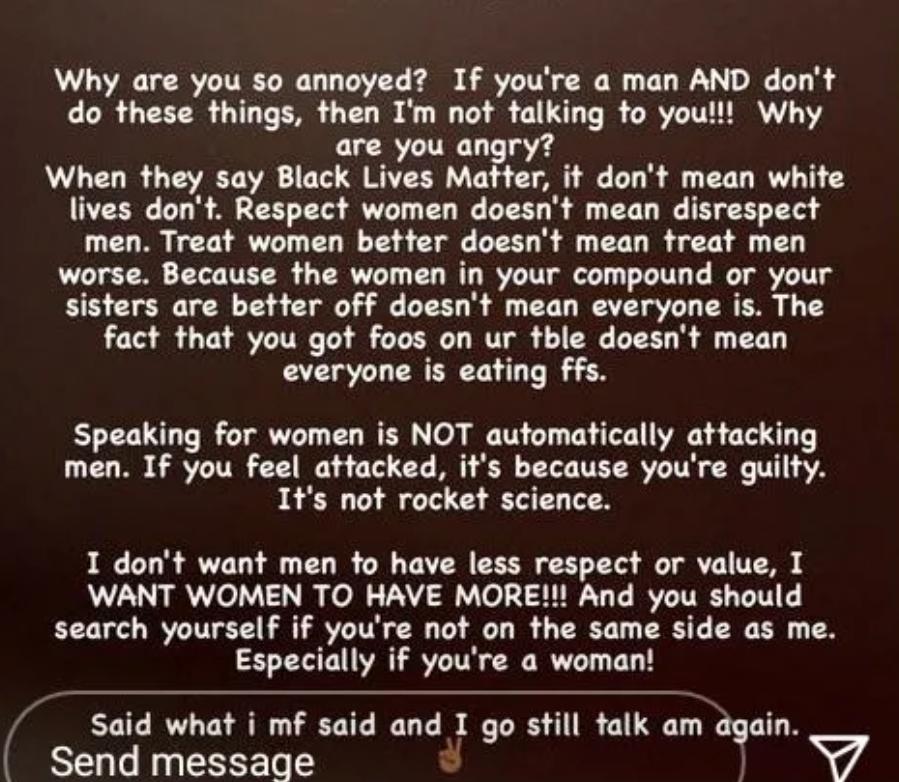 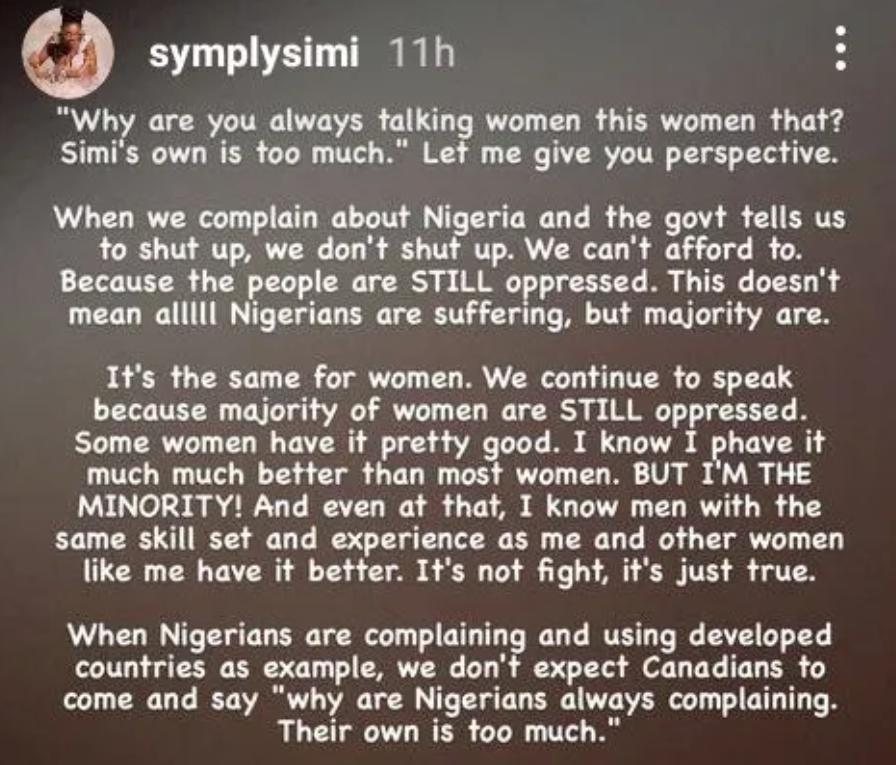